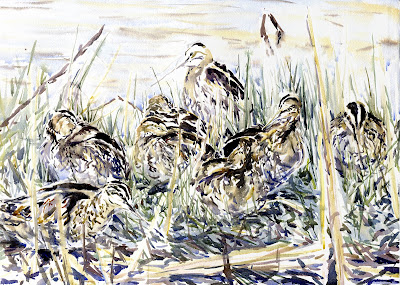 11 Snipe on Pwll Penarth today, pushed into the usual corner when the water is high, just in view with a scope. With great synchrosy they rest together for large periods of the day, but occassionaly stir. Preening on mass is a precurser to mobilisination and a frenzied group foray onto the muddy margines to feed. Probing in and out of the mud, bobbing with mechanical motion they whir around until suddenly they will freeze crouch , tuck their bills in and return to resting possition for perhaps hours. Luckily this group stayed just about in view for me to attempt the larger compositon I have been working up to for the last couple of weeks. I won't return now until the water level drops as this brings the Snipe closer into view and hopefully fresh drawing possibilities.
Posted by Chris Wallbank at 10:10 No comments: 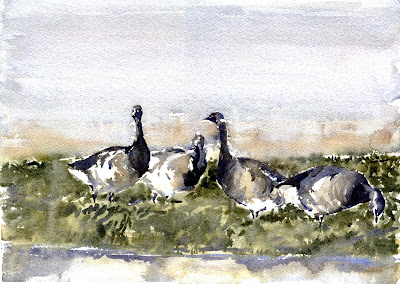 Finally find the nine Brent geese that have been sighted sporadically all winter around Ynys Las. I find them much further up river from the Leri than expected, on a high spring tide that brings a lot of wildfowl to this particular roost, including around 100 pintail today. Smaller than the barnacle geese, similar in basic monochrome pattern but with totally different blacks and greys that appear more sooty in colour. The head and neck is entirely black except for a necklace of white edged feathers on the adult and first winter birds.
There is a good bush to stand half in with my easel and telescope, further covered by the embankment I can draw the birds undisturbed as the tide brings them right up to me. I am not alone I discover, noticing nearby straight edged cuboid clumps of foliage that rotate and twitch are wildfowlers draped in camouflage netting.
The Dyfi drains dead on midday, the ducks have drifted with receding water, but the Brents just put their feet down and revert to terrestrial grazing habits. Swimming from island to island at first until they are entirely surrounded by the high and relatively dry saltflats of the estuary at low tide. Out of the water I can see their pale bellies that are actually a quite dark umber and barred, receding to pale almost white along the flanks. This patterning and degree of darkness varies greatly, with some almost completely dark brown underneath (possibly juveniles or first winter); it is tempting to declare some as dark bellied Brents, a race that breeds in Northern Siberia as apposed to these pales that have migrated from Arctic Canada, Greenland, Svalbard or Franz Josef Land; but they would be darker more uniformally.But which ever race, this is a species of goose that breeds farther North than any other and the hardy nature of it shows in the small but compact and bullish morphology of those Brents on the Dyfi. I watch them as they are lured by newly revealed grazing in the wake of the dropping tide, further and further into the basin of the Dyfi's lowest channels. 9 Grey specks in a sea of brackish grassland stretching far towards a horizon of cropped mountain peaks and the cold white sky above; a touch of arctic tundra at home...
A reason I was keen to track this new species is that I thought they would afford closer views than the barnacle geese and other geese here, due to their location. I was not disappointed and I think even at low tide these birds will allow me good views. In this sketch, I have fallen into the trap of using too many neutrals as I often do working on geese and trying at speed to create many blacks and greys, overall though, they have a subtly different form from the barnacles that is fantastic to draw. I also forgot to keep up with the tide as well as the moving birds, so lost any reference to the interesting lagoons and submerged grass surrounding the birds when I first started.
Posted by Chris Wallbank at 02:16 No comments: 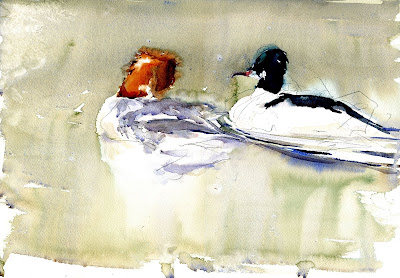 Early morning stillness on Llyn Coed Y Dinas. Different species different sizes seem evenly spaced in a pattern covering the far island. suddenly a disturbance sends lapwings reeling upwards, wigeon and teal tumble into the water. As the rafts of birds radiate outwards a male goosander glides towards the deepest centre of the lake, flanked by the red headed female, her neck pointed out straight and her head lowering until the sharp bill skims the surface at full kilter. The pair twist serenely on the mirror calm water as they preen for a while until they are about to drift behind the far side of the island, the female drops her head and resumes her less subtle courtship once more. The male this time taking notice treads her underwater, pinning her with such a tight grip to a tuft of the head feathers, that when her buoyancy overcomes his efforts she is violently flung outwards once he relinquishes his hold. 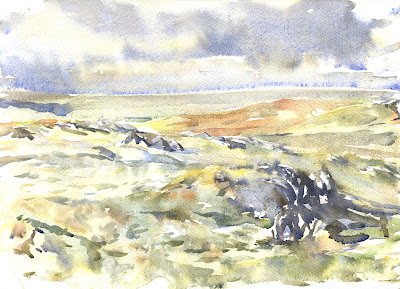 A respite in the gales this morning meant I could go back on the uplands and my favourite patch around Bwlch Y Garreg - Three lakes and bog in the basin of an arching ridge. After days of rain Llyn mawr had overspilled into the bog, four lapwing took advantage of the extended wetland (have never sen them on this site before). Two female goldeneye on the water and a third lone juvenile on llyn Du (like last year). I left the goldeneye as light was too flat to make them out in detail and headed up garreg hir. The Westerlies soon picked up again and by the afternoon gusting around 30mph. Oblique sunlight illuminated the acid grasslands, soft yellows that are so hard to capture in paint though it helps when they contrast with the dark blue grey low hanging clouds on a day like today. The golden plover are not to be found on their usual roost between the burial cairns, although a squadron of 6 buzz low through this gully early on.

Painting in lea of a rocky out crop, fairly good perspective to the North West, over the Glonc bogs and towards cloud storms over the Arans. Drew composition and tones in bs+um, drop ru into highlights in sky (surprisingly similar to ny in right quantities). Wash of ny for grass, then dropped in various mixes e.g bs+qr and ru+um for subtle soft colours in grass. Although a little rushed as green has overrun the ny too much. Approach for larger scale.

Descending from ridge, big mixed flock of starling and fieldfare take advantage of the muddy gate ways and the lake for a brief moment is a deep Prussian blue, striking especially where the water spills around the equally vivid russet red margins. Try to paint the goldeneye in good light but typically flighty, choosing to fly down the lake as soon as I've set up everything right down to mixing my first colour.
Posted by Chris Wallbank at 11:35 1 comment: