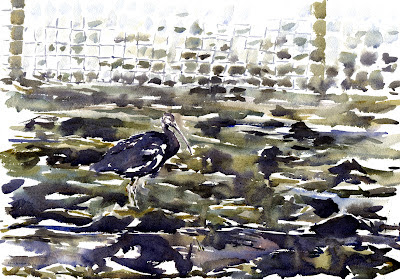 Returned to Glossy Ibis. Cold Easterly still , occasional sleet shower. Bird worming near to pools catching its reflection. Conditions conspire for a good days painting of studies and this final piece in the gathering gloom of late afternoon and icy sea mist.
20.04.2012 : note Ibis 8J9 ringed in southern Spain has been recorded in Bedfordshire, Essex and other parts of Wales since leaving Borth late February.
Posted by Chris Wallbank at 11:47 No comments: 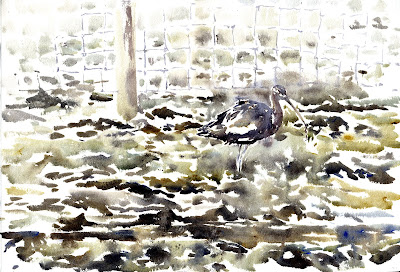 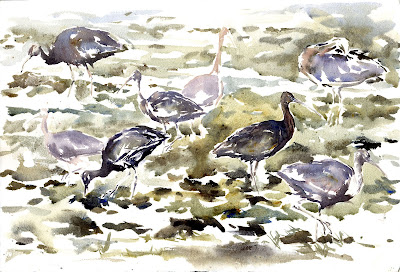 A keen Easterly wind brings cold air on a clear day, the temperature stays sub-zero. A Glossy Ibis found in a waterlogged paddock, picking through dark clods of earth churned up, almost ploughed up by the horses hooves. It has stayed loyal to this spot all week, sharing it with jackdaws and gulls, though it gets the juiciest worms by wrestling its bill deep below the permafrost. It uses its bill with great agility, not least when overcoming the problem of getting a worm grasped with the tip all the way down into its mouth, by throwing and snapping at the prey mid air, or when it senses something in the ground, twisting and pushing to drive the bill onto the prey.
The colours on this bird are a challenge to paint, far from being black its wings are an iridescent oily rainbow of teal, crimson purples and blues, whilst the body is a dark rich burgundy brown that lightens towards the head which becomes streaked with pin lined feathers. Bill and legs are almost peach in some light and the skin around the eyes a contrasting cool blue. I try many colour combinations over the two days, always limited and settle on an unusual palette of UM (gs), IR, BU, (RU). The subtle changes of iridescence helped by the constantly moving, freezing and reticulating pigments of watercolour on the page. An addictive way of painting brought on by an unusual bird in unusual conditions over the last two days.
Posted by Chris Wallbank at 10:34 No comments: 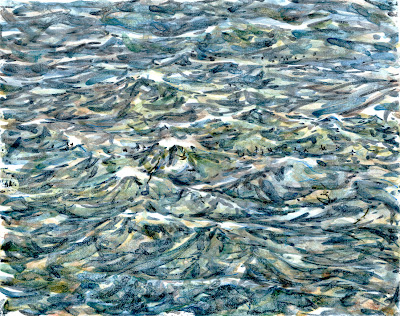 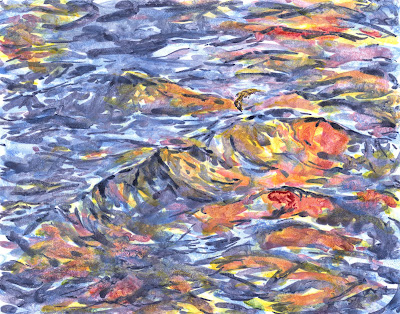 The Biscay Bonxie continues its wandering, top, past Cabo Mayo where I was sea watching in 2010 and below, sunset from the Pont Aven during 2010 Orca survey ...not sure where this will take me next, maybe a bigger scene, maybe Borth.
Posted by Chris Wallbank at 10:15 No comments: 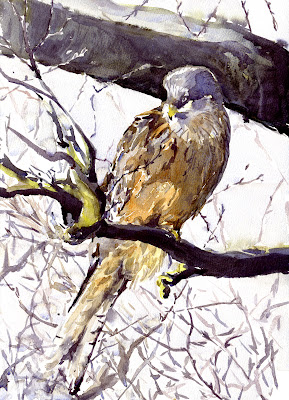 Red kite settles in an oak tree above Maesllyn and surveys the teal on the frozen lake below. I scoured the four or so mile length of this raised peat bog and found very little besides the kites and buzzards. Later this evening at least five hen harries quartering the north end including a male. A full moon, blue sky, snow capped hills beyond the flat expanse of russet marsh - reminds me of Asgrimur Jonsson's Iceland. Temperature plummets, paints frozen by the time more harriers pass.
Posted by Chris Wallbank at 11:47 1 comment: