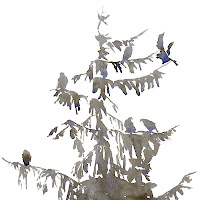 Feeding time at Nant Yr Arian, drawing from a new view point. Dense fog means the kites take a long time to build up confidence and wait for better visibility, heard but not seen. An hour late, one swoops into view before more can be seen congregating in the background before drifting through the picture plain and descend on mass into the foreground. cb Vdb (qr) 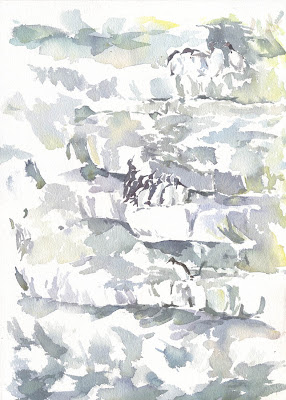 Headed West over the snowy pass in a bid to escape our endless winter inland and to Craig yr Aderyn (bird rock), Ceredigion's main sea bird colony of mostly guillemot as well as razorbill, kittiwake, shag and cormorant. The cliffs won't be packed here until the birds start laying and feeding chicks in May to June, but the guillemots stake out the best ledges and display around now, so already there is a good sprinkling of birds about. Much of the colony is directly below the precipice and impossible to see, but on occasion in a lull of the swell and buffered upwards on the wind, I catch the familiar sound of the sea cliffs coming to life and a warm sense of Spring, tantalisingly close.

5 choughs weave their own sharp lyric into the cliff-scape as they pass from time to time in typical aerobatic display. A Peregrine, silent marauder, at one point provides the loudest crescendo as it sends the kittiwake colony spilling off the cliff in a snowy white outburst of alarm; Kittiwake! Kittiwake! name calling over and over as they tumble onto the safe surface of the sea.

The painting is made from an outcrop below the path that gives good but distant views of a small group of displaying guillemots,tight groups head bobbing and jostling on prime ledges.  The geology of brittle shale like stone eroding in vast sheets has formed layer after layer of perfect high rise terraces for the birds. Guano stained ledges delineate the potentially vast extent of the colony once breeding is in full swing. This ends further up the headland where the perfectly horizontal ledges rear up in a swirling kink of strata, impossible to cling to, let alone lay an egg on.

(Bad in anything Northerly)
Posted by Chris Wallbank at 09:07 No comments: