A drawing installation made by Chris Wallbank in collaboration with Professor Tim Birkhead for Festival of the Mind, exhibited throughout Sheffield Cathedral. 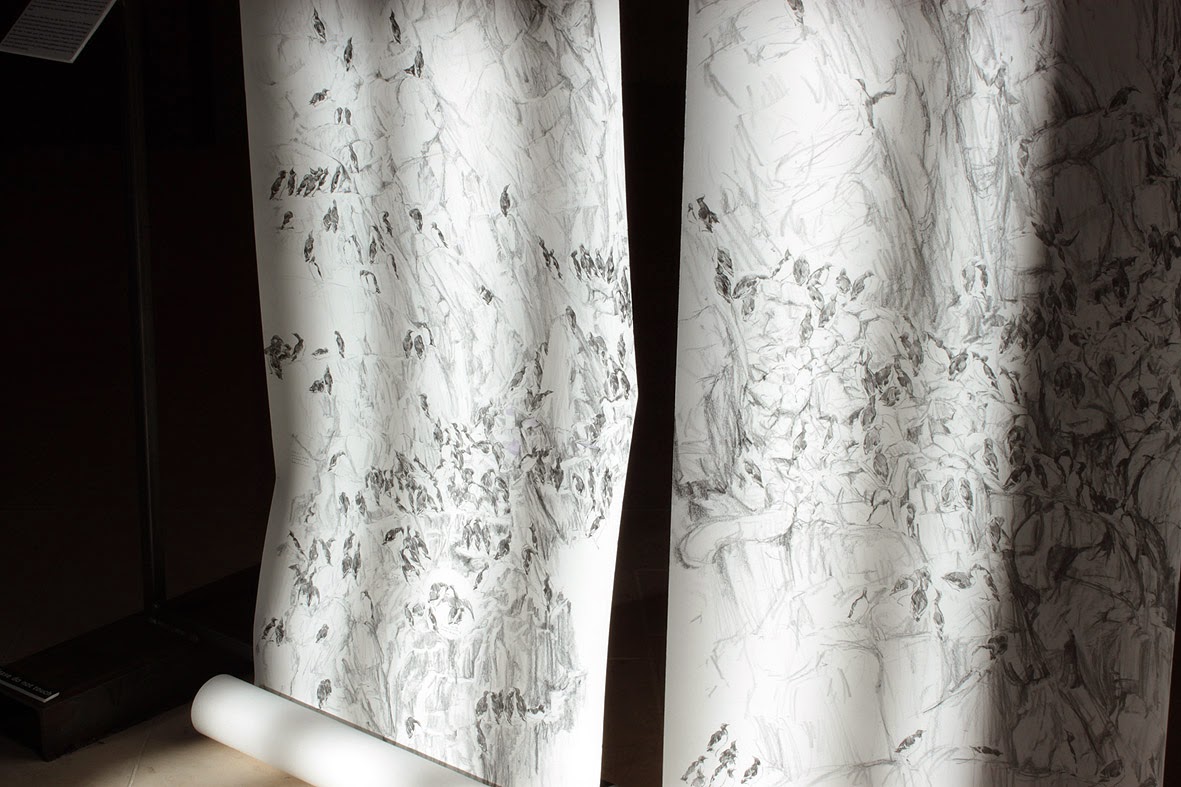 Skomer Island off the Pembrokeshire coast, is famous for its unspoilt scenery, carpets of wild bluebells in the spring and populations of breeding seabirds in the summer. It is also the site of one of the most important scientific studies of one particular seabird species: the common guillemot. This study was established by Tim Birkhead, Professor of Behavioural Ecology at The University of Sheffield and a leading expert of ornithology who has returned to Skomer to monitor the island's breeding guillemots every year since 1972. The value of his research lies in 40 years of experience and data collection. The long term insight it presents reveals remarkable natural history discoveries of a species that can live for 30 years, returning to the exact same tiny breeding site to reproduce with the same partner year after year. The guillemot breeds at high densities on cliff ledge colonies known as loomeries, laying a single egg on the bare rock. Under these conditions they develop loyalties, alliances, friendships and rivalries which makes guillemot society one of the most complex and fascinating of the entire animal kingdom.

Guillemots are highly vulnerable to oil pollution which has been a major factor in the species’ overall decline. Skomer's population today is a considerable 25,000 pairs, but even this is a long way off  the 100,000 pairs estimated to be on the Island as recently as the 1930's. In February 2014 consistently heavy storms, the likes of which have become more common as a result of climate change, led to the death of at least 40,000 seabirds including a high proportion of guillemots. These birds were counted from those found washed up in 'wrecks' along the Atlantic Coast of Northern Europe and only reflect a small proportion of the total loss at sea. Three times the average number of Skomer-ringed birds were found dead during this period. Guillemot populations can withstand very occasional years of high mortality, but a run of them could spell disaster and the added pressures of oil pollution, on-going depletion of fish stocks and climate change make that a real possibility. Long term studies like Tim Birkhead's are vital for understanding the health of a guillemot population, but they also enable us to gauge the state of a constantly changing marine environment. It is tragic then that Natural Resources Wales has recently withdrawn the modest funding needed to run Skomer's guillemot monitoring project, disregarding the benefits of continuing this long-term study.

In 2014, for what may be the last season of the long term guillemot project on Skomer, visual artist Chris Wallbank, supported by The University of Sheffield’s Festival of the Mind, travelled to the Island to draw the loomeries that form the basis of Tim Birkhead's research. Wallbank worked on a large scale, necessary to capture the impressive size and formation of a loomery with enough detail to describe many of the individual birds and behaviour that the monitoring project focuses on. His method was to observe with a telescope, panning through the mass of squabbling, preening, copulating birds, unrolling and re-rolling a large paper scroll as the drawing progressed. The resulting work exhibited around the cathedral, tracks the changing dynamic of Skomer's Loomeries throughout the breeding season. Made from direct observation and informed by Tim Birkhead's insight into guillemot society, close examination of these drawings reveals the order hidden within Skomer's spectacular loomeries. 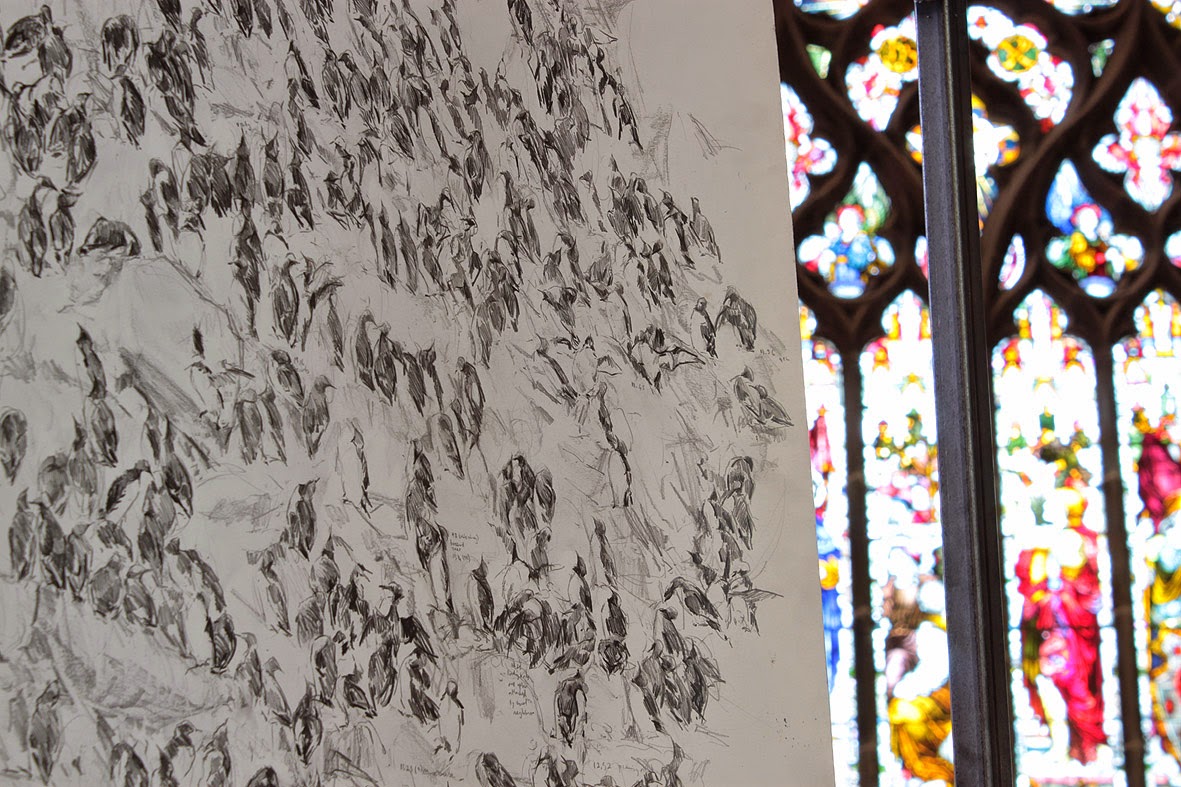 The guillemots in these drawings have recently returned to breed at their loomery located on the scree and gullies that cascade down the cliffs of a precipitous inlet on Skomer Island known as bull Hole. It was early spring when this drawing was made, but Bull Hole still roared with the surge of a long fetching Atlantic swell and winds gusting over 40 knots. Even this storm however could not drown out the raucous chorus of the thousands of guillemots at the loomery on the other side of the inlet. Their breeding season had begun and the whole colony  buzzed with social interaction as returning birds re-established old territories and reinforced bonds with their partners and neighbours. Guillemots are capable of great tenderness towards one another, developing friendships which at the very least serve to strengthen a loomery's cohesion and its defence against predatory gulls and ravens. Displays of aggression between guillemots are nearly as common in the loomery and squabbles over territory frequently erupt into brutal fights. This is particularly true at the beginning of the season when males desperately attempt to steal copulations from the partners of other males. 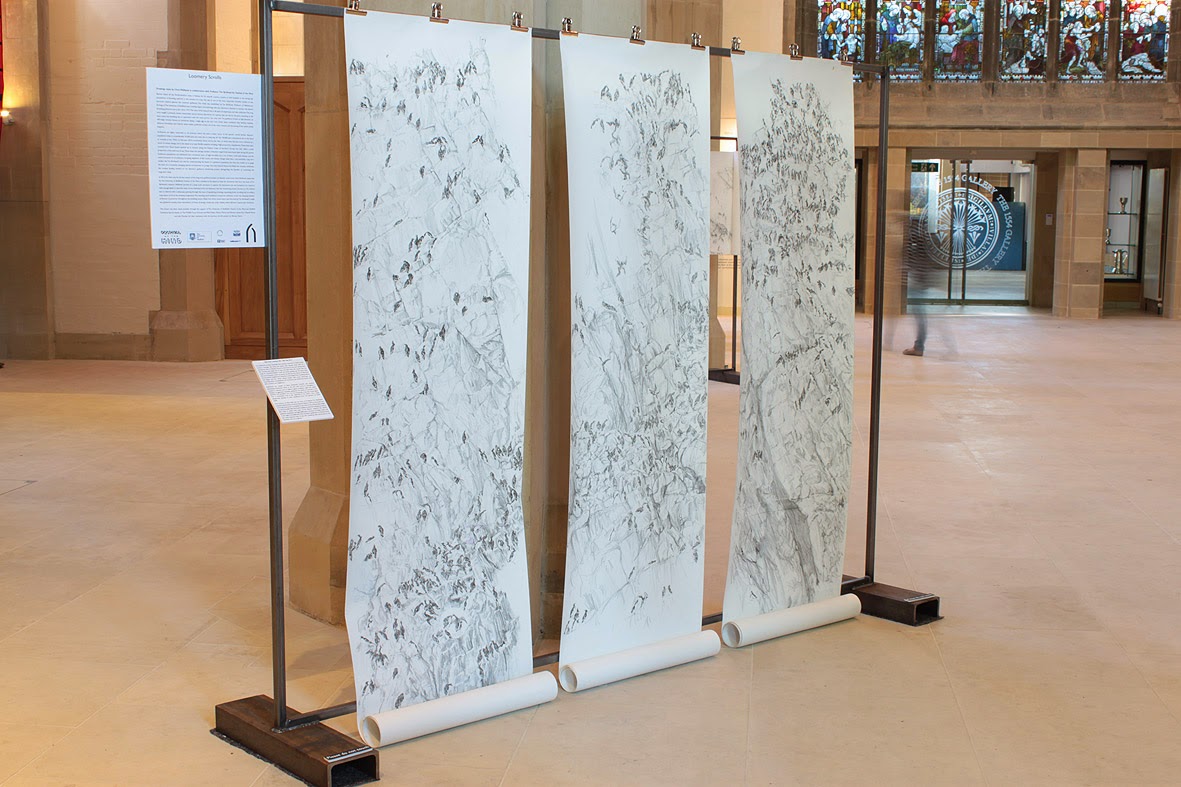 The loomery at Bull Hole was the focus of Professor Tim Birkhead's research when he first arrived on Skomer Island in 1972. In the lower part of the left hand scroll it is possible to see some of the artificial slate ledges he and his student Ben Hatchwell installed to enhance breeding success at Bull Hole. In these early years of his Skomer research the island's guillemot population averaged 2000 pairs, a fraction of today's total, now in the region of 25,000 pairs. This increase in guillemots on Skomer bucks the trend, because most of the UK's breeding sites, particularly in the Northern UK are in decline. Read posts on making Bull Hole Loomery here.

In this scroll, many of the guillemots can be seen incubating eggs, a marked transformation from the Bull Hole drawing made just a week previously when no eggs had yet been laid. Guillemots at a loomery are synchronized in their breeding, so laying tends to occur at the same time. This synchrony enhances the value of dense breeding groups which form an essential barrier against avian predators of eggs and chicks. 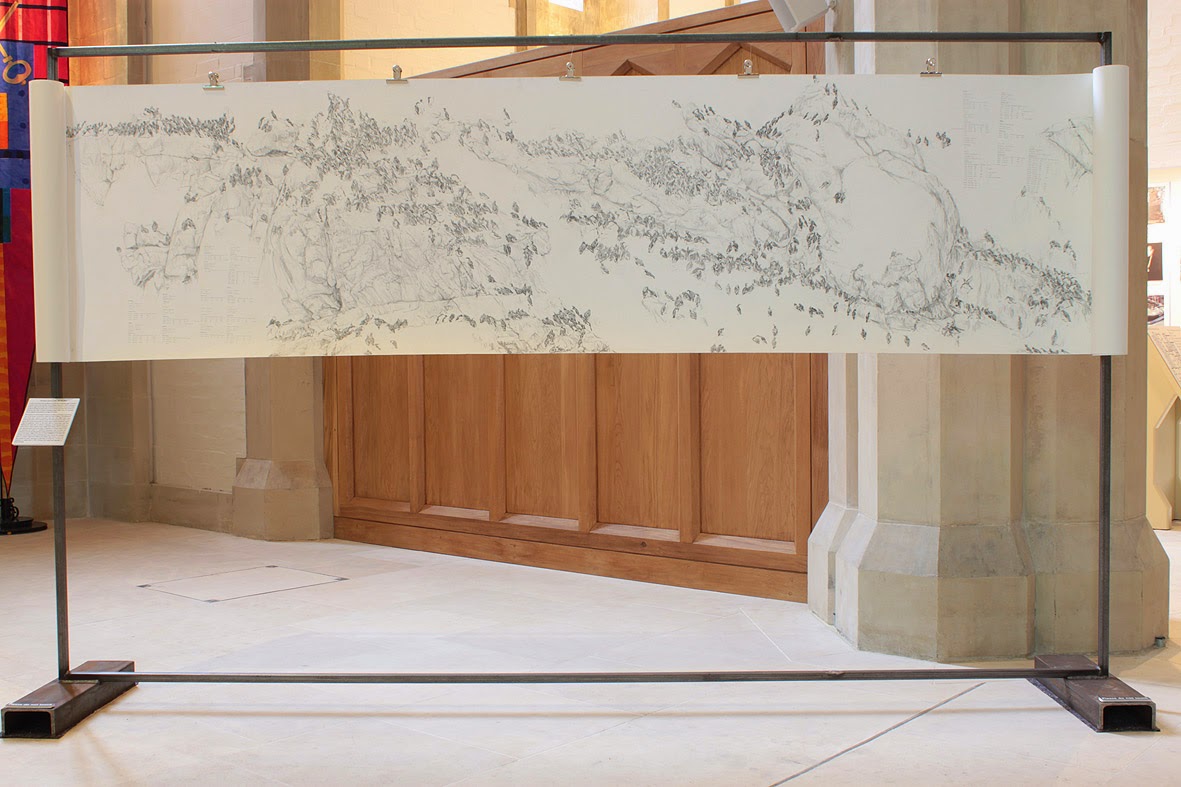 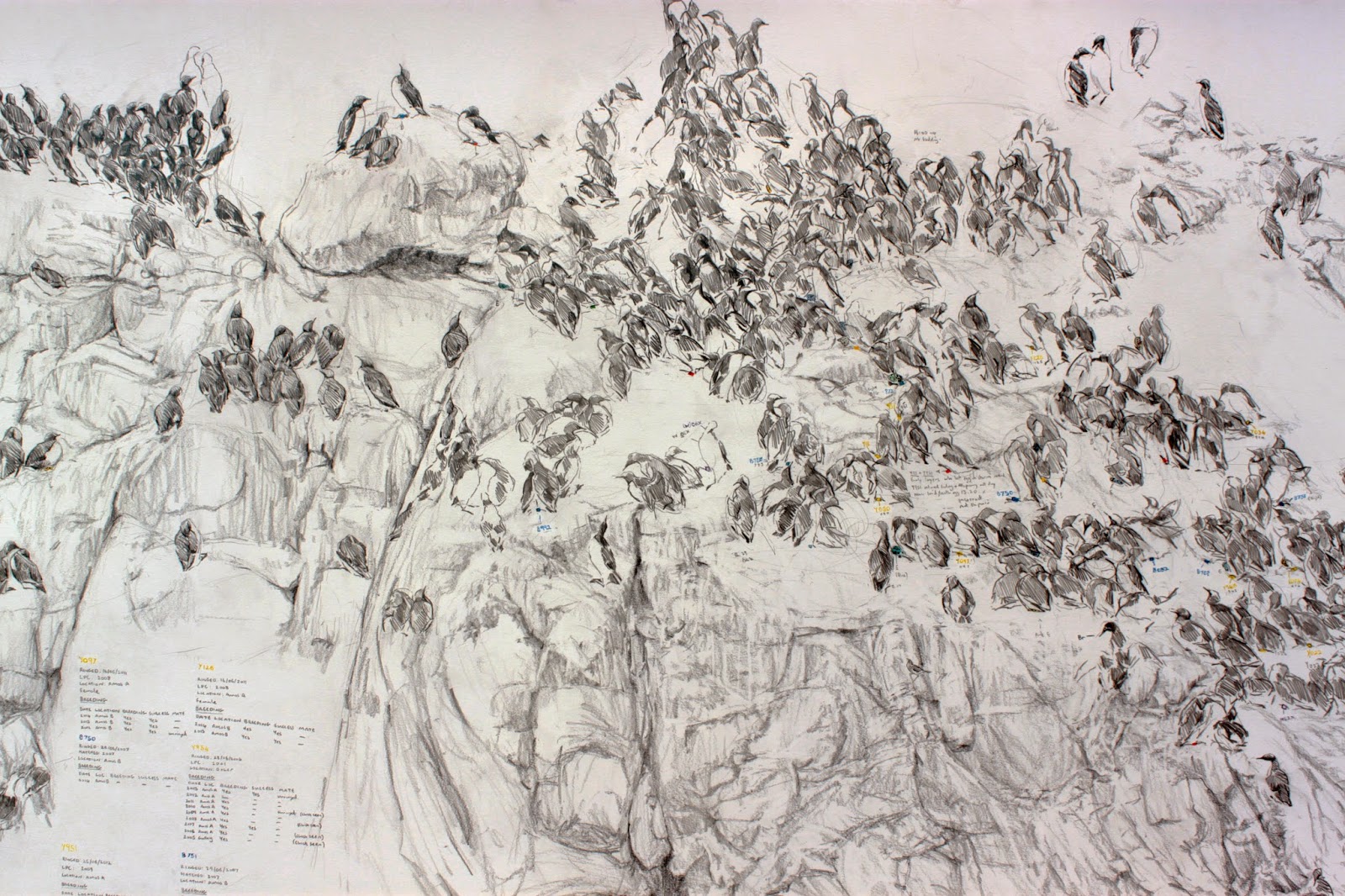 The loomery in this drawing is found on an elbow of volcanic rock folding out to sea known as the Amos which has been Professor Tim Birkhead's main study plot colony on Skomer since the mid 1980s. Every year towards the end of the breeding season Tim Birkhead and his team mark about 300 of the Amos guillemot chicks using uniquely numbered colour rings. As guillemots return to the same spot to breed every year Tim Birkhead has been able to build up a database of life histories from the observations made of these colour ringed birds. Being able to recognise the returning birds in this way makes it possible to monitor factors vital for assessing the health of a guillemot population such as adult and immature survival, breeding success, timing of breeding and the chick’s diet. Any of the colour ringed birds seen by Chris Wallbank as he drew the loomery are included on this scroll along with their history. For example there is a yellow ringed bird Y366 at the bottom right corner which the data reveals has been returning to the Amos to breed for 14 years. It hatched at a nearby site in 1993  making it the oldest bird identified in these drawings. Read a post on making The Amos Loomery here.

There was no text accompanying this scroll in the exhibition. It was made with brush and ink over a single sitting at a coast site where the guillemots form very dense loomeries on top of sea stacks. The piece was an exercise in shorthand, using calligraphic characters to describe the multitude of individuals as a whole. Read a post on making Elegug Cyfnos here. 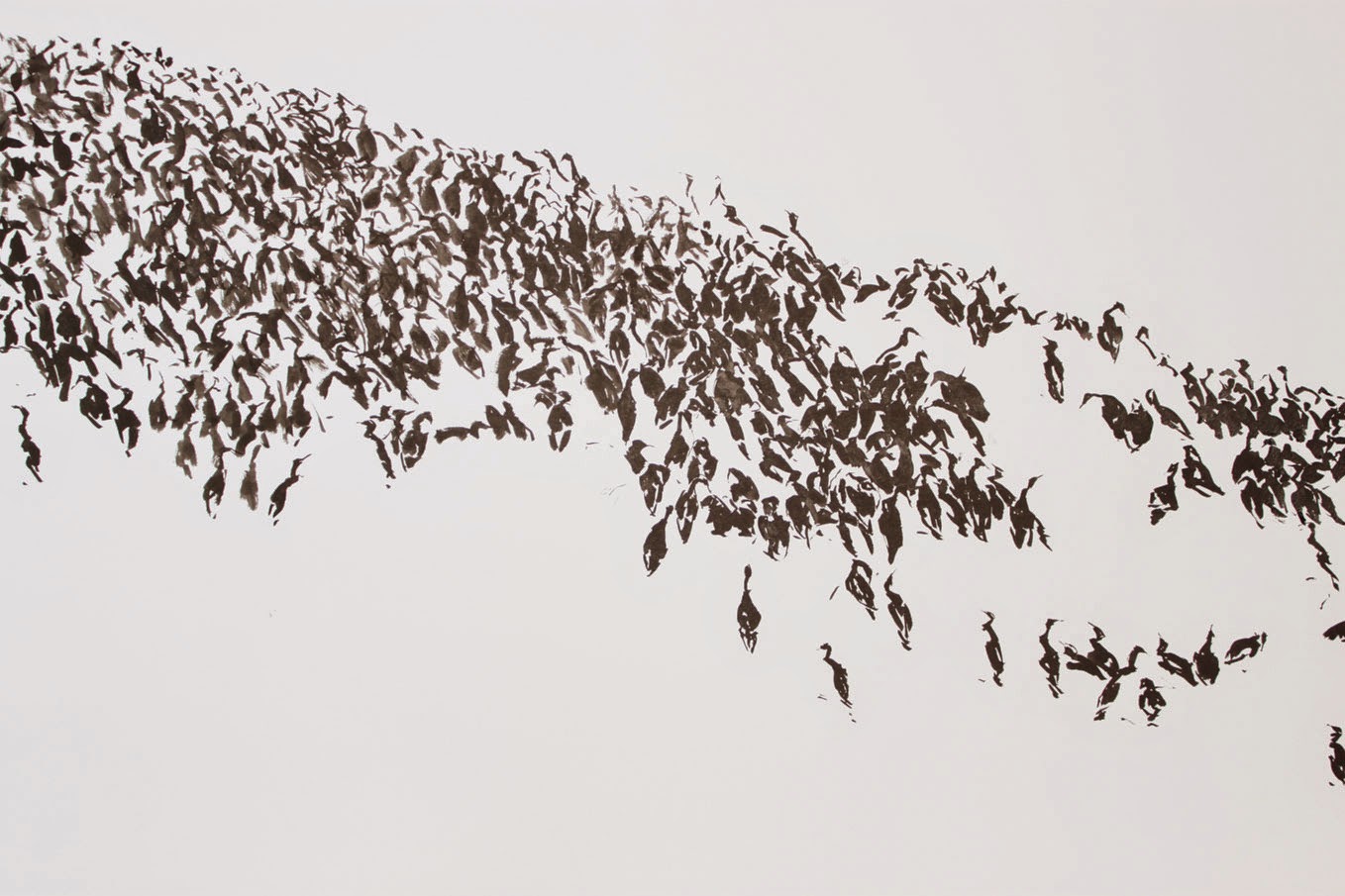 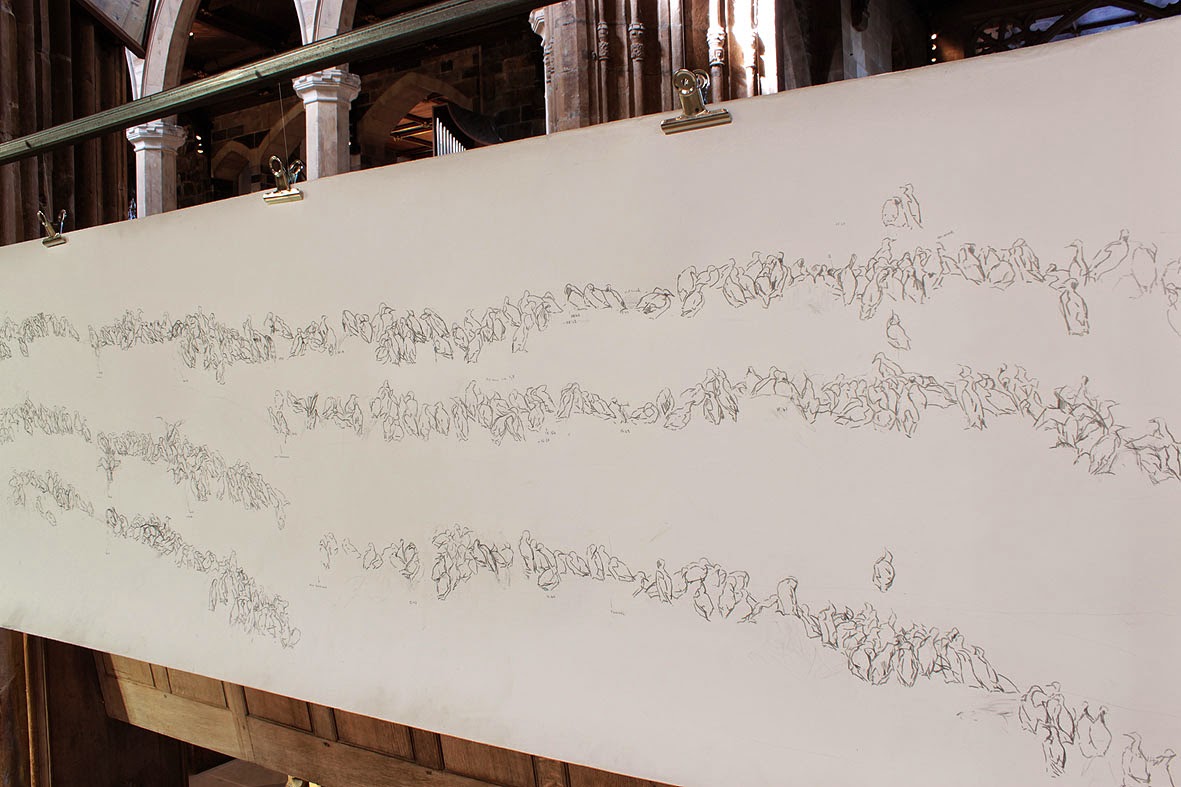 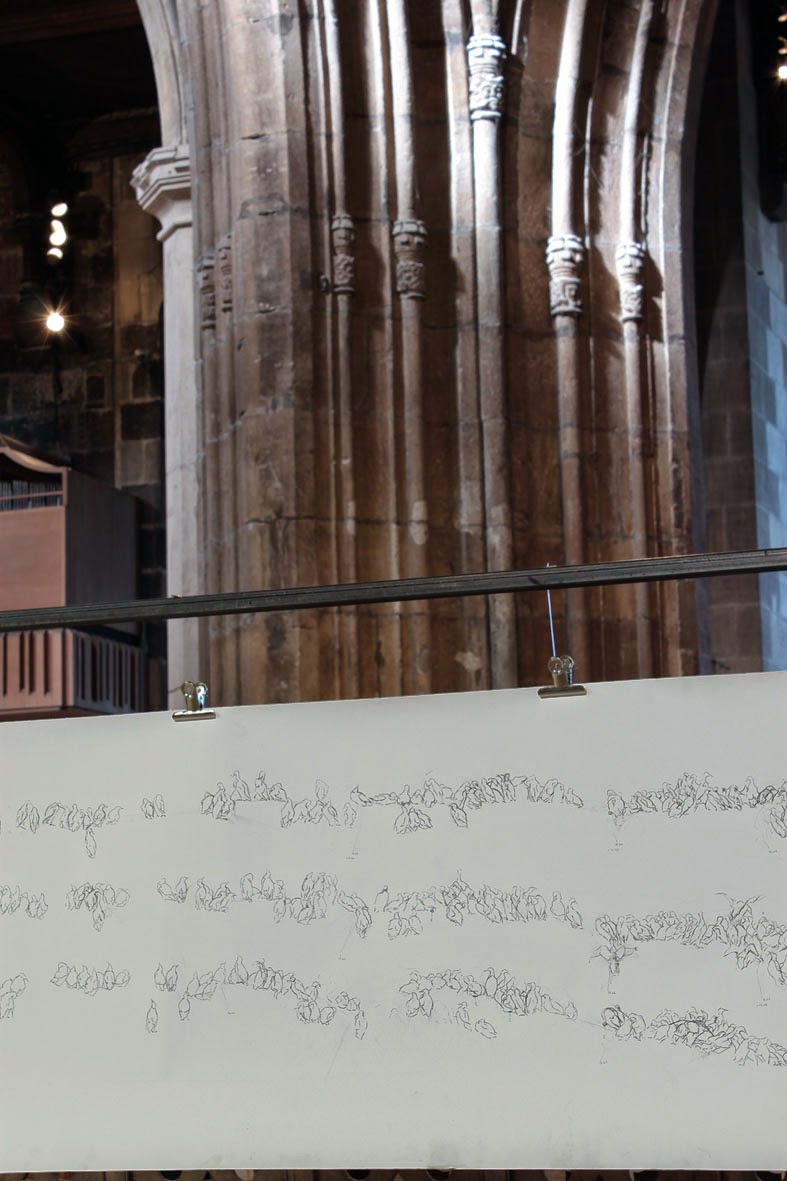 In these scrolls, Chris Wallbank has drawn the same ledge repeatedly over several hours to produce a time-lapse image that records the changing dynamic of a loomery. They are drawn after the main laying period on Skomer, when guillemot pairs take it in turns to incubate the egg, relieving one another to forage and feed at sea. During this period the density of guillemots on the ledge rises at certain times of day, usually early morning and late afternoon when the pairs swap incubating duties. This process known as 'change over' can often be lengthy, since the incubating bird is usually reluctant to move off the egg and needs to be persuaded through long reassuring bouts of allopreening combined with gentle nudges that become firmer as time wears on. Despite breeding in incredibly close proximity, in some cases up to seventy breeding pairs crammed onto a single square metre of ledge, guillemots are able to recognise their own egg because each one has markings unique to the female that laid it. This results in an infinite variety of colour and pattern occurring in guillemot eggs, ranging from dark turquoise to pale orange, wispy streaks to heavy blotches and spatters, as can be seen in the long ledge drawing here as well as in the Amos scroll. Read post on making the time lapse scrolls here and here. 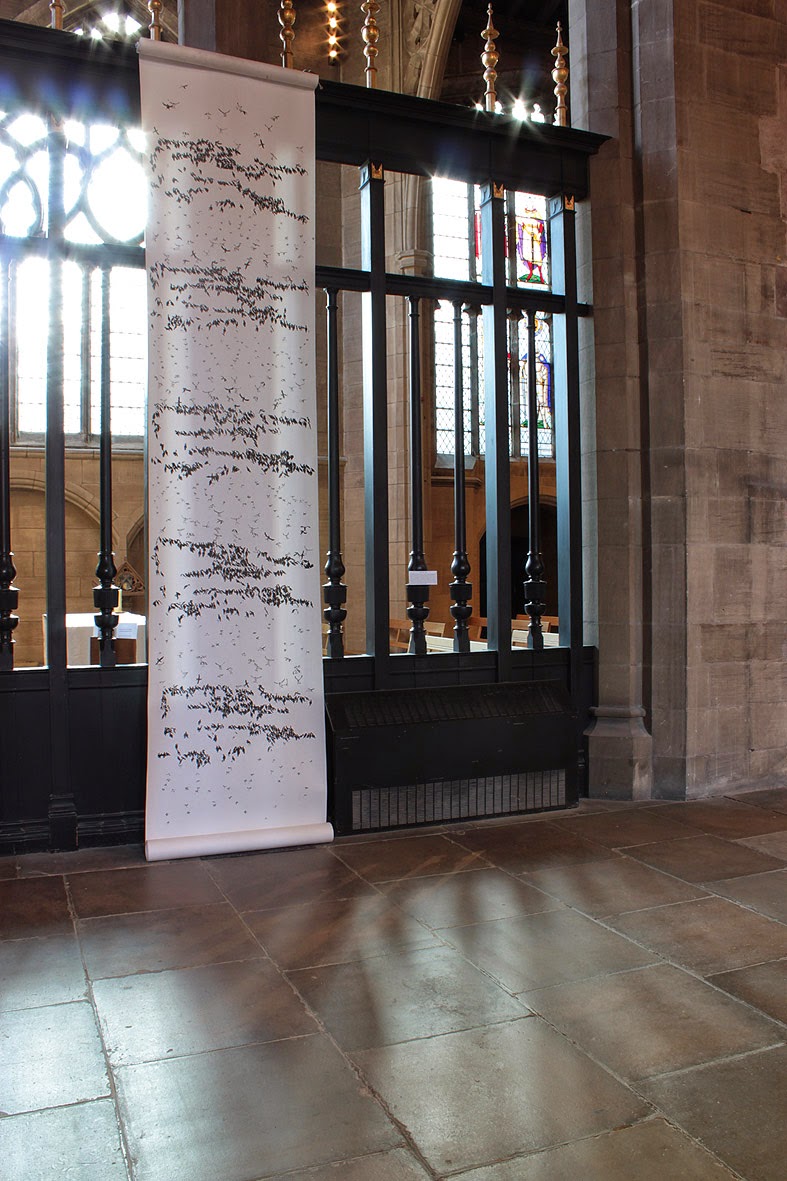 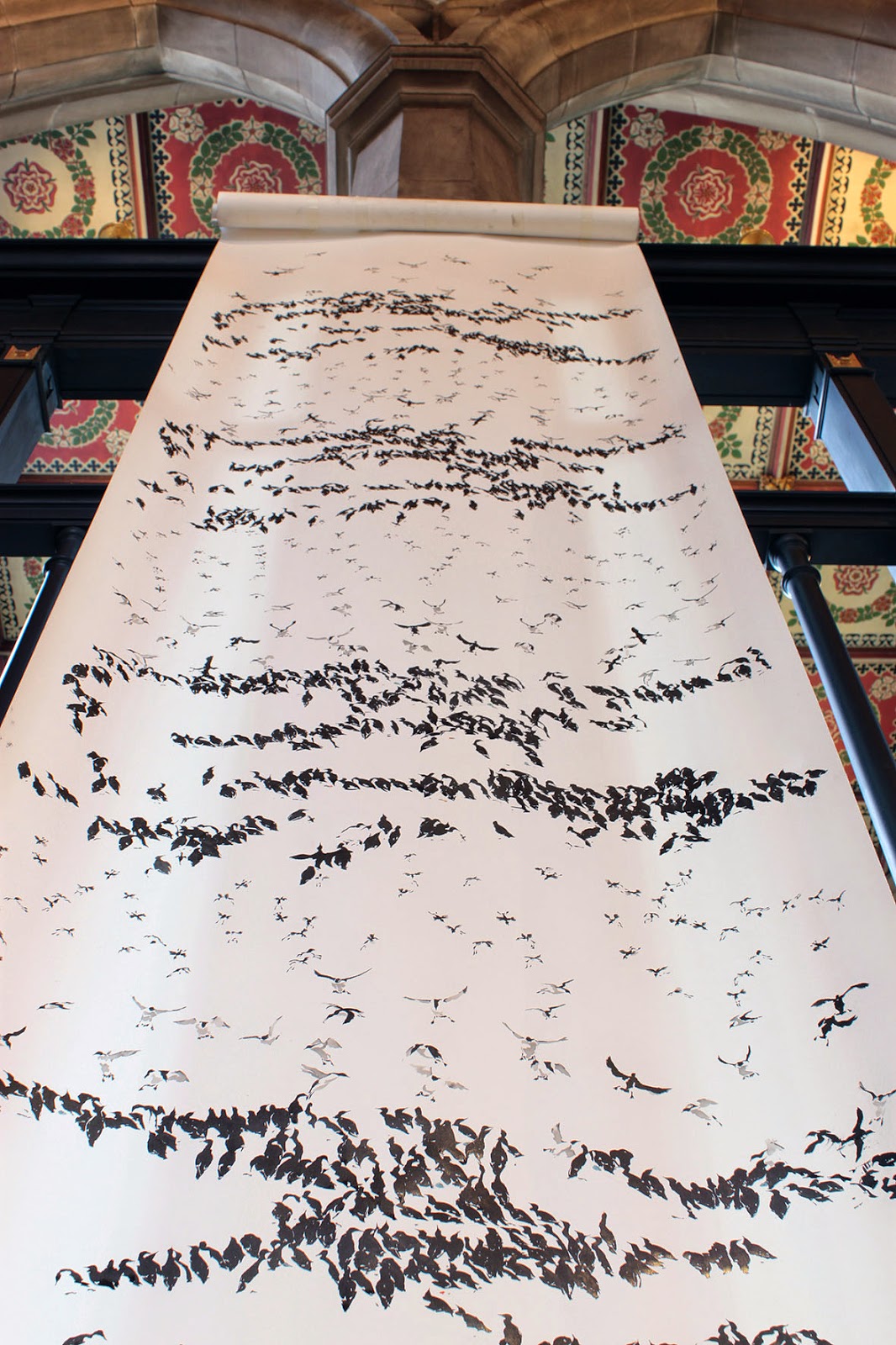 Land - Loom - Leap, guillemots landing and their fledgling leaping from an imagined loomery to form a repeating pattern on a 4 metre long hanging scroll.

The guillemot young leave the colony around 21 days after hatching. Although barely one third the size of an adult and still unable to fly the young jump from the cliffs, often falling hundreds of metres to the sea below. The young, make this leap of faith with encouragement from their fathers who calls to them from below. On the breeding ledges they were vulnerable to avian predation, now at sea they stand a better chance of survival, diving under the waves and staying close to their father. They remain at sea with their father for two or three months until fully fledged and it will be a further two years at least before they return to Skomer and a further five years after that before they attempt to breed. 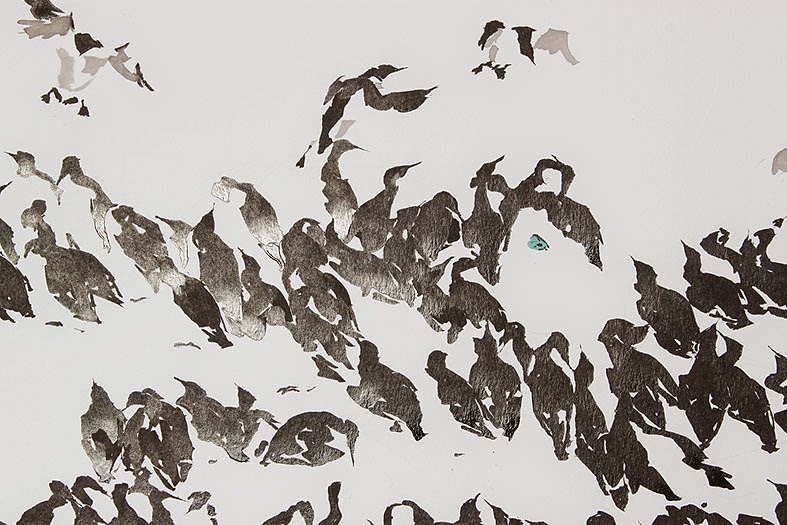 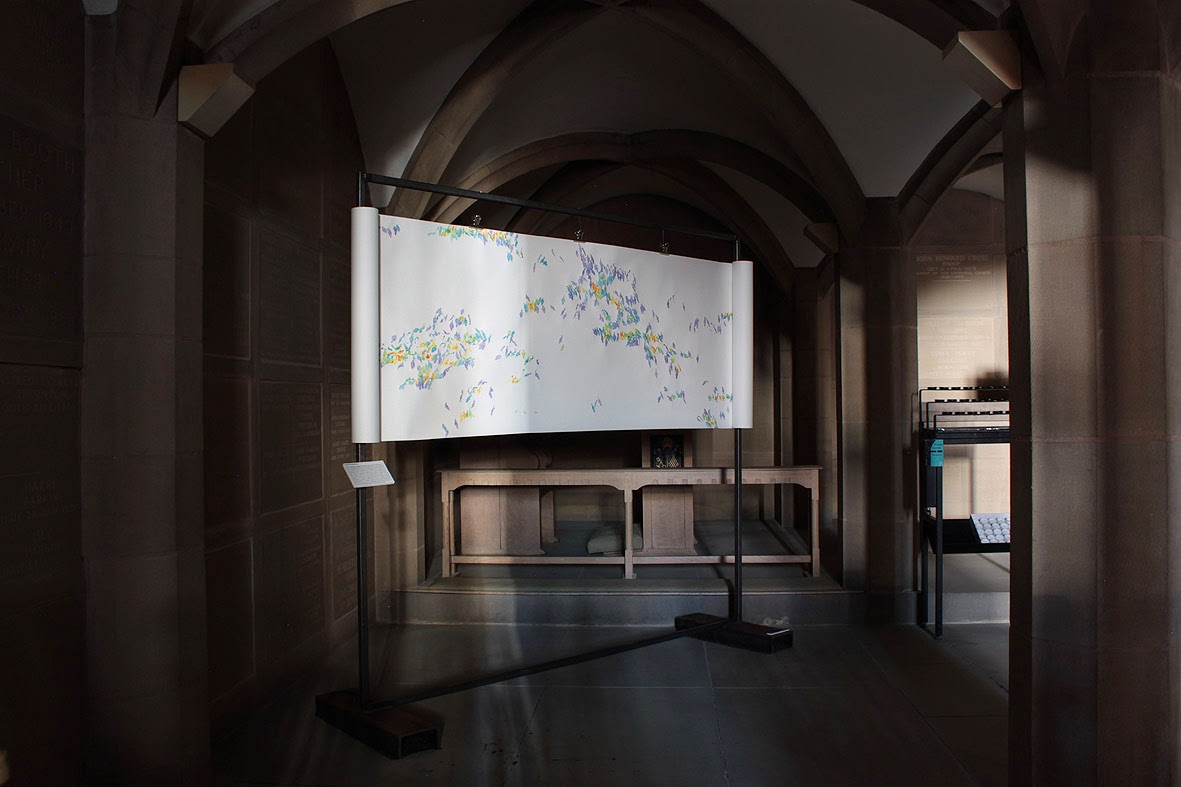 After the young have fledged Female guillemots remain at the loomery for some 14 days defending their territory and laying claim to the breeding site for the following season. Professor Tim Birkhead's research on Skomer has found that the optimum breeding sites for guillemots are on ledges where the greatest density of birds can occur. In this scroll Chris Wallbank uses colour to offer an impression of where these 'hot spots' might be found on Skomer's Amos loomery. Of course the paradox for guillemots seeking such optimum sites is that they are protected from imposters as well as predators by an alliance of neighbouring birds. How guillemots decide which ledges to colonise in the first place is more of a mystery, although watching guillemots re-colonise Skomer since the 1970's, Professor Tim Birkhead has noticed their loomeries grow into the same formations as those seen in photographs taken on the island 80 years ago. 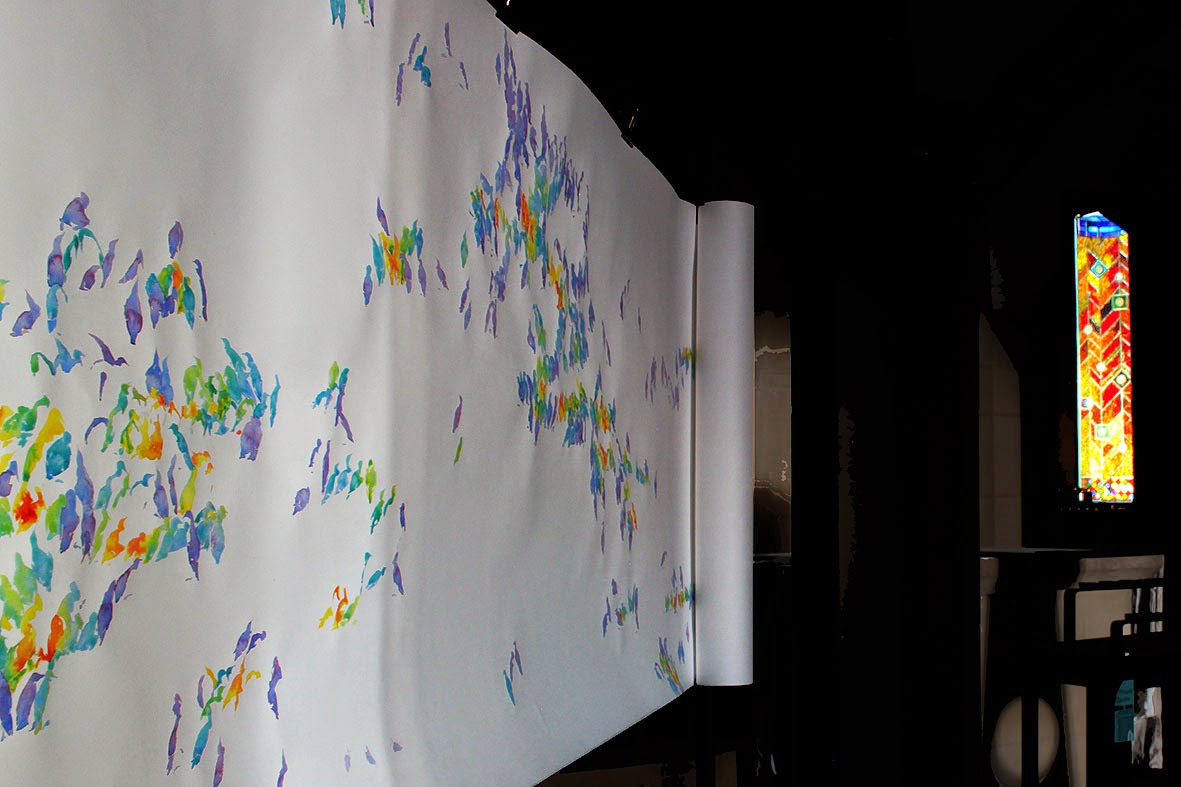 This project has been made possible through the support of The University of Sheffield's Festival of the Mind and Sheffield Cathedral. Special thanks to The Wildlife Trust of South and West Wales, Shenaz Khimji and Skomer researchers Elspeth Kenny and Julie Riordan  for their assistance with the Loomery Scrolls project on Skomer Island.