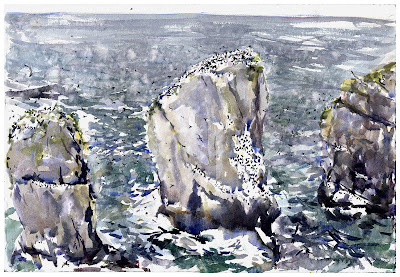 Castlemartin's sea bird colonies are at most times a forbidden zone situated within an MOD on/offshore firing range. Visits have to be timed with pauses in firing; our first opportunity being between 16.30 - 21.30 last Tuesday. Travelling along the South coast we soon begin passing heavy military convoys before hitting the barracks where we turn onto a reinforced concrete lane, pausing to check - no red flags flying. The track
is direct to the sea, the land is sparse, save for the odd relic to its previous use; a chapel on the skyline and down a lane the shell of an old farm house. Giant scrapes laid by tanks and the sillouttes of Apache helicopters lined up on tarmac, faces like velociraptor, remind us of the short window of dormancy in this normally volatile patch, in which we safely pass to make our findings.
A dense sea fog had surged well inland that day bringing the kind of drizzle that hangs static in the space, charging the air with an atmosphere of suspense out of which are conjured gloomy shape shifting landscapes. This is how the colony revealed to us as we walked over the brow of the cliff seen in right of this picture, crammed at eye level on the central stack, a moated outpost fortified by shear numbers. Immediately jeapordy soars by in the wraith shape of a peregrine, greater black backed gulls patrol inches above the colony jabbing up and down at auks half their size like dancing puppets until large sections of the colony give way, in a cascade of black and white flight, leaving eggs and young vulnerable.
At eye level the birds whir by on a myriad of flight paths, drawing the various cliff tops, stacks and waves into a complex matrix of activity. On the main stack intimate behaviour can be watched closely at eye level, guillemots bow and nod to one another in constant communication that ripples through the colony in a constant swaying waving motion, accompanied with pulses of verbal gutteral gurgling rolling growls of consternation - oooOOOooAAAaooOOWWW!. From below Kitti-wake!! Kitti-Wake!! calls roll around the walls of sea caves before punching up over the clifftop din in an almighty eruption of volume. Razorbills sky point silently in pairs on the steepest ledges. Squinting through the turbulence of sea and mist, rafts of auks are pushed into view on the rising swell , more and more constellations of black bodies revealed in the time spent staring out over the ocean.
On the last day of our trip the access road reopens for a whole day. We return and paint through a day of sun, strong S Westerly and squally showers. A new aspect from the East is revealed and I enjoy taking in the whole scene from further back this time, taking in the merging movements of sea, birds, light and geology with this painting. 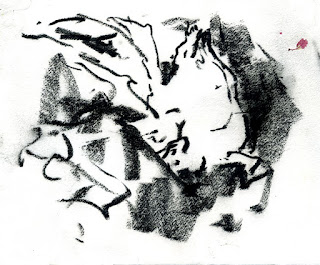 Fun to draw in negative; charcoal turning velvety slick and deep black underwater. Soon get into rhythm drawing one sketch after another and ferrying each one back to shore in turn. Floating in current, strange to have a still subject and be the one whose moving for a change. 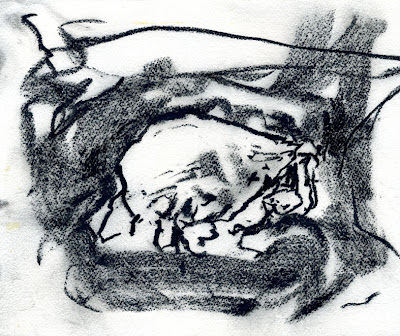 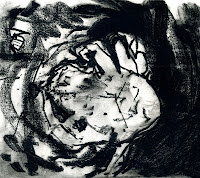 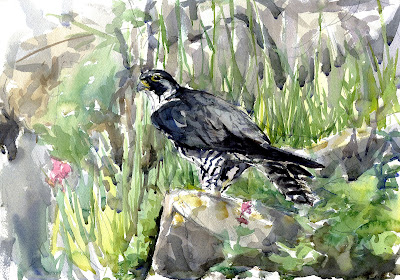 Arrival 11am: Warm, Sun/cloud, light breeze.
1st thing, larger young visible above grassy ledge. Almost all down is gone, evidence of persistant preening snagged in surrounding undergrowth like a dusting of snow. A little fluffy patch however still gives it punk appearance reminiscent of its earlier development. Bill and face skin, grey blue (no yellow like adult) Generally browner in mantle, moustache and other dark upper parts, rufous buff on front. Soon out of sight behind grass again. I adult (each parent seems to have favourite perch, this one tercial's, with females near nest, also often on same perch at similar time of day, afternoon being best here) on far right in shade of overhanging bush - quick brush study of cast shadows over form.
No action until 2pm: Adults flying over, calling, young calling. Chicks become very vocal and active, wing stretching, running etc. It was as if they knew adult was preparing to hunt or perhaps they saw one make a kill beyond the trees behind me and below them. Because, shortly after female (lighter than unusually dark tercial) returns with kill. Frenzy ensues, with lots of noise as female tears off flesh for young (later the young do this for themselves). Unpleasant noise of usual repetitive falcon screech but also kind of yapping, possibly younger chick? This lasts 10 -15 minutes. Female airborne to perch on left cliff in full view as I start drawing, then moves to favourite perch, luckily adopting similar position .
It is a good posture, balanced, stretched with tail up slightly showing dramatic black on white bars of lower underside. I get the form in pencil then adapt with the first washes as she drops her wings, relaxes tail and twists a little. I note shadows and take care to get tricky eye - bill position well. 1st wash: wb+cr, good to capture light bluey upper parts of mantle as well as darkness of primaries in heavier washes. However quite green and not grey enough so decide to introduce um and cb (breaking usual habit of limiting palette to one blue). Cb=bs for lightest blue of bill and shadows on front. Um + bs in mantle to tone down original wb washes.
Return to wb+cy for grass, fairly neutral to start then building up intensity, working best where yellows and blues show through from underwash. Cb + bs useful for keeping grey of rock pale, receding and distinguishable from greys of bird (problem in earlier studies) creating depth. Pallette cb, wb, um, cy, cr, qr (flowers), bs. Grass built up with varying intensity of green and carefully darkening and colouring background rock showing in spaces between. With care this could be affective although time consuming.

(+starting with pencil helpful today +Risky with pallete by adding extra blues, threw up more possibilities for colours like yellow to show more of their characteristics + standing always best).