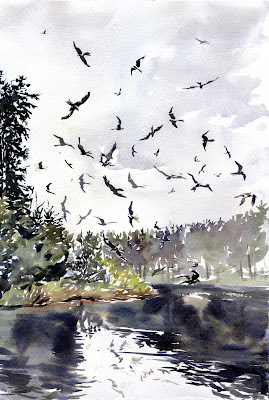 Arrived at my latest (favourite) spot in time to put in sky for a kite feeding picture. Flat, blue-grey sky, hint of heavier clouds building on horizon. Sun a weak disk, a neat puncture in the cloud cover leaking light outwards, seeping yellow ochre flooding the wet sky. c.100 kites today and as many spectators. Kites are in molt, frayed tails barbed like streamers behind a rocketship. Primaries droop at awkward right angles which I am almost squeamish to see, realising I unintentionally interpret the whole wing as equivalent to human limbs in my nearest translation or empathy of flight. Kites gather in the trees, some spruces bending under the weight of several birds, the sound of their whistles ricochet  off the still lake and around the arena of trees.
An anticipatory hush infects the waiting crowd once the food is thrown across the feeding area, before the kites gather. They are wary despite their apparent familiarity and punctuation with feeding time day after day, circling tighter and lower until one bird will fold its wings tight back and drop to the floor; more follow twisting in tight corkscrews to the ground. The frenzy is tight and I hear the thwack as birds collide, though with little consequence. Some I notice are bolder stooping straight through the pussy footing flock with the confidence of a peregrine. Others, prefer the benefits of piracy, maybe they lack the confidence to go to ground although I think some occupy their time waiting for the flock to mass for the next feed by stealing on the wing. Every 20 minutes or so the flock regroups above the feeding station with the last bout being between 5.00 and 6.00 (depending on the day) before the kites drift away and the crows move in. On the way home, at Llanbrynmiar I  pass the usual group of kites, probably going to roost, I am sure they have come from the feeding.

Two Colour (um+bs) wash to draw the kites (in later versions intro ru). Concentrate on angle of attack, wing and tail positions, depth of undercarriage, flow and clarity of wash, using the shadow and patterning to define posture and form (although silhouetted from this aspect). Later work uses bins, looking at individuals movements and movement of flock to work up an accurate convincing fluid composition with feel of the frenzy. 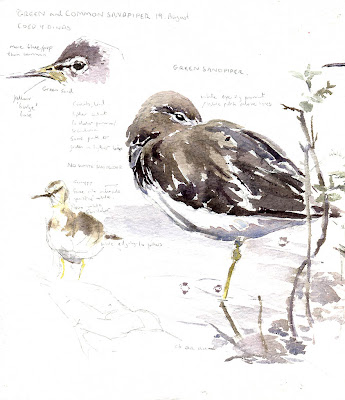 Brief view of Green Sandpiper, a first. Used pencil for first time  in a while, allowing me to finish painting accurately after bird was flushed out of sight by Lapwing. Differences from common are lack of white shoulder, striking white eye ring and  white chequers along edge of covert/wing feathers (not shown here). At least 2 green and 2 common. Flat light turned water surface into white mirror. Generally noticed, light is turning towards more dramatic direction of winter time.
Posted by Chris Wallbank at 03:02 No comments: 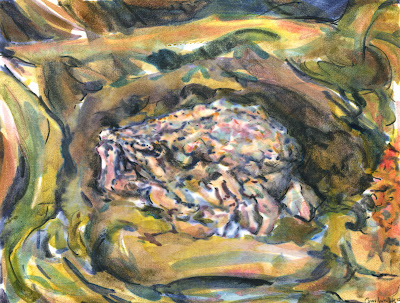 Print from Martin's Haven drawings.
az+wb--ru+ty(wb,az)
Posted by Chris Wallbank at 02:49 No comments: 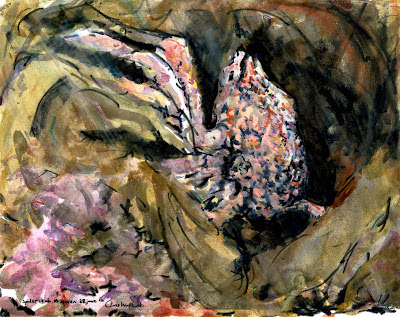 1st attempt at print based on Spider Crab drawings from Martin's Haven (28.06 post). Much in the dark working on this one, but now can see pockets of techniques and colours that could be good and those that I can rethink. 1st plate - cb+ru+(qr). 2nd plate - qr+ny+cb, ru+". Use colour to enhance depth, transparency/mirk. More definate with 1st plate so as to minimise crayon; better colour reactions on 2nd.
Posted by Chris Wallbank at 07:01 1 comment: