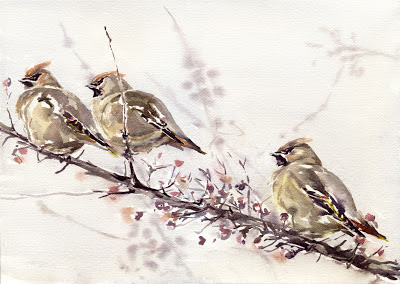 Another Waxwing explosion this year, after the berry crops of their usual wintering grounds on the continent have failed. I have anticipated their arrival since early November, tracking reports of their mass invasion moving steadily South from Orkney, Aberdeen and then closer to home the other week with 250+ in North Wales. Like two years ago when they last showed in Mid Wales, I first found our Waxwings in the local college car park gorging on fluorescent orange  berries of an ornamental Rowan tree at the end of the last row of parking bays. They are pretty birds, rare, tolerant of people with a pleasing almost purring call and congregate in big flocks. Not surprisingly the college waxwings draw a crowd of birders, photographers and the local ringing group. In turn we attract enough attention from the students, lined up peering down the railway track fence laden with Hawthorn, are we trainspotting? I could correct them but realise it's much of a muchness. 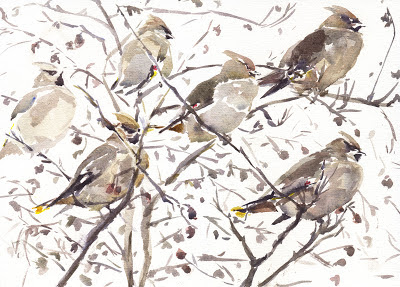 So this particular car park is mildly hostile for an anorak  where the main occupation is driving around between speed bumps at the top of the rev limiter - colourful driving the grounds man who has taken a real shine to the waxwings calls it, when seriously concerned for our safety. But the real attitude in the car park is the pack of 100 so punk crested waxwings, necking berry after berry until the Sorbus are stripped and then moving onto the Hawthorn, this is what keeps me coming back and sucking up the mild abuse that comes from standing on my own in sight of an adolescent smoker's corner, at an easel with bins glued to my eyes, a brush in one hand and a palette in the other; "Oi mate... Oi LENSY!... what you looking at?!....(me) birds?....Ideal!...what sort... Brunettes! ....(me) nice one, do you want to have a look?"

To be fair a nice lady offered me a cup of tea the other day, that was when it was really cold. During these cold snaps the birds become even bolder, dangling and gulping at the low hanging berries just a few feet from our faces. On wet weekends when there are no cars about they come onto the ground to drink and flutter in the puddles, it can become a real frenzy with a constant conveyor of trilling birds commuting between bush and water. After all this time the one thing that still spooks them are the trains, every two hours one passes and like a touch paper ignites every bush along the back of the car park in succession sending flocks of frantic, screeching waxwing reeling into the sky. My most productive time seems to be late afternoon, when the Waxwings gather behind a classroom, filling every available limb and tangle of hawthorn bush, feeding, preening and just hanging out before the trills suddenly begin to crescendo and with a sudden eruption of flight they head purposefully West towards Mochdre to roost. Each time I realise with accute anxiety, that they may not come back as the berries thin out each day and it could be another 2, 5 even 10 years before conditions conspire for their winter return here once more. But there are so many possibilities, compositions, behaviours to paint and each drawing leads to ways I could improve on the next, this is the addiction, the anxiety, the frustration I have right now of relying on the unpredictable. 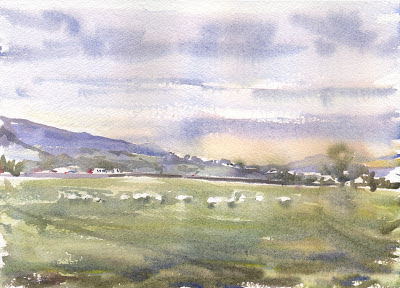 Whoopers are back! 16 grazing a field I haven't seen them in before. Has great landscape possibilities especially in dusk light, as this sketch reminds me, from access track.
Posted by Chris Wallbank at 11:10 No comments: