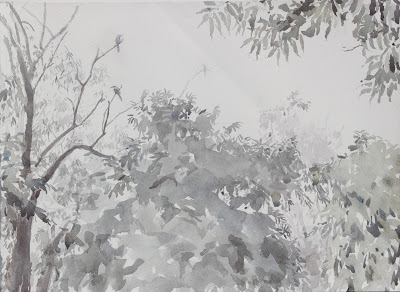 Week 8 November
The infrared swirl straddles central India on the map, twisting through dark red and purple towards two black boils at its epicentre sitting over Delhi and including Modinagar. Through the window there is no visible sign of this storm, the air is deadly still, but the authorities advise people to stay indoors to avoid harm, schools are closed and events cancelled. Ministers in Delhi blame the silent storm on crops being burnt in neighbouring states, the same practice carried out for many thousands of years. Either way, the region is in a state of emergency; that deep red static tornado on the satellite map signifying air quality declares a reading of 999 micrograms of pollutant per cubic metre (the scale does not go above 999, true levels have at times reached 1300). This is toxic air that can clog arteries and cause premature death on a mass scale. To put it into perspective, London when it has broken the EU regulated maximum pollutant levels by several fold has never exceeded 200 micrograms per cubic metre. Outside the window each morning I can make out the metal work of the balcony and just beyond a slight silhouette of the huge ficus that normally dominates the view and that's it; total white out, Jack the ripper type smog. Stay indoors; I have often opened my bedroom door this week to find a hazy cloud hanging menacingly in the hall. I leave the compound, I need to explore, draw.

Sometimes I go out early, pass over the threshold cut out of the compound gate, salute the guard as I go and step into a world of saturated grey tones and wispy spectres. Car's horns blare as they emerge with a rush and disintegrate again into the mist. I move freely, my own whiteness bleached out in the smog makes me almost incognito; Westerners don't usually have reason to visit Modinagar, so our presence on the street always draws considerable attention. I enjoy these quiet mornings, lingering. By 7 o'clock the road is already clogging with vehicles, often stuck behind the lumbering carts off to Modi Mills, laden with sugar cane. This main street is the only route between Delhi and the city of Meerut. M5 level traffic skims fruit sellers and food stalls, and pedestrians and motor bikes all jostling for space on the narrow, ambiguous fringes squeezed between heavy traffic and the toxic verge of open drains that run beneath the houses. Down there, open flumes run purple black drain water, steam rising where domestic waste mingles with run off from the Sugar mill. A syrypy sweet mildew smell permeates the sharp tang of exhaust fumes and thickens the soup in my lungs.


When I first arrived here, I quickly accepted that I was not going to be making work about wildlife in this crowded concrete strip. It was a surprise then on one of these smoggy mornings, to find myself drawing several Indian Hornbills clearly outlined on the branches of a dead tree in Modi Mander park a few metres from the main street. They were directly overhead circled by the simple silhouettes of tropical foliage, spade shaped leaves that taper to a long crimped thread, long frond leaves and fine showers of bamboo all staggered into shades of mist. The heavy beaked, long tailed hornbills grounded at roost by the dense smog turned this corner of a polluted park into a jungle scene of my imagination. 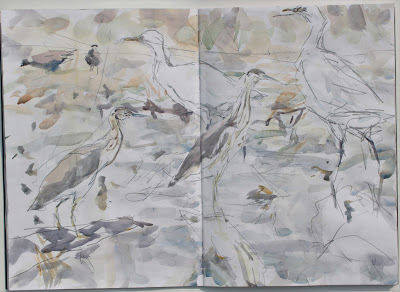 On one of my free days this week, I walked to the fields around Junta. As if I were ten again, I took the long route balancing on leats and ducking behind bushes to avoid some children I knew would sweetly harass me to breaking point and ruin any chances of drawing. My aim was to reach the raised platform around a solitary banyan tree under which was a small domed shrine. When I got there I found a new field had been flooded that throughout the day, drew down more and more birds until the whole 200 metre square was jammed with avian activity. Numerous bright egrets sparkling in the wet mud, white against yellowing smog, black drongos with their long quilled tails quivering as they spin a flight back and forth from the bushes catching insects on the wing, a ridiculously heavy billed kingfisher loudly zigzags from perch to perch. Pond herons stalk more stealthily between the erratic dance of the egrets, yellow wagtails and other small passerines dip in and out the flooded furrows, two red naped ibis, unmistakable long curved bills, scream out their intended approach from the tip of a near by pylon. The Ibis arrive at the field edge wearily probing their way around the periphery, red wattles lapwing enter in force and more boldly. They are the first to be spooked though, taking flight occasionally, after some unknown threat sending the skittish egret up in a wheeling raucous flock along with other previously unseen sandpipers and a single dotterel. The stealthy, cryptic pond herons stay still as statues, cool and calm. I try to draw the whole scene but need to zoom in on the birds. I work in my sketchbook for a while using binoculars. Its nice to just relax and strangely for me use a pencil to work things out. I build up a few studies then draw an entire composition in front of me before return with watercolour, lightly moving around the picture as birds fall into position, reflections and light into place. The key is good composition and rhythmic brushstrokes. I think this approach will work for more complicated field paintings than I have been making.


Worn out on Friday I procrastinate about leaving the house, the street, the market, the mill, the back-roads, the fields; all are possibilities all relentless. I look out my window for the 100th time across the unkempt lawn, ficus rustling with the business of Macaques foraging, towards the red slabbed walls of anther crumbling wing of the house curving around a disjointed patio with its swimming pool centre piece, a foot of half silted turquoise grey water at the bottom. A dumpy silhouette on the corner of a rusted, twisted anti-macaque cage catches my eye, another on a vertical drainpipe; too small and upright to be the ubiquitous pigeon. A quick look through the binoculars confirms two Smyrna kingfisher, double the size of our European kingfisher, but the same iridescent blue blaze on its back, a rich chestnut brown head and flank and white breast. Its red bill is proportionately longer and much thicker, the upper mandible chevroned and lower one downwardly curved and heavy giving it a near shoe bill shaped appearance. The kingfisher remain for near enough two hours, allowing me to make several brush studies. 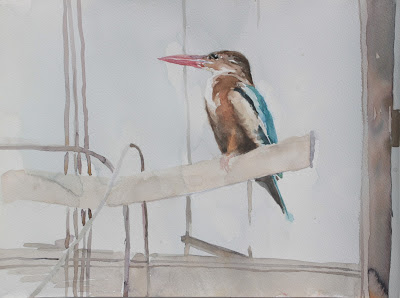 More recently, I have discovered a river uptown attracting birds for all the wrong reasons, as it runs black with raw sewage and clogged so completely with rubbish it turns to a mire where pigs wade accompanied by an egret entourage, black kites as well as the pond herons and other water birds I found previously in the fields. The main street crosses this swampy travesty, temples line its banks, and people live all around in the fowl stench. It's corrupted, fowled, distressing, wild, precious and sacred. 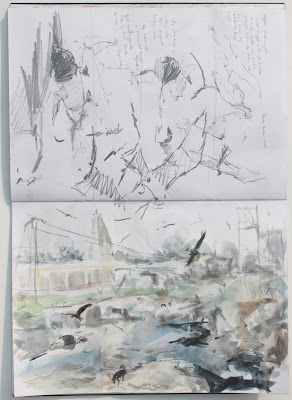 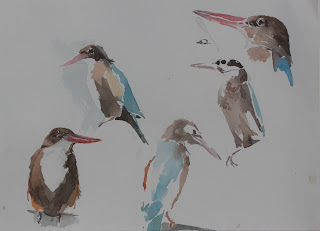 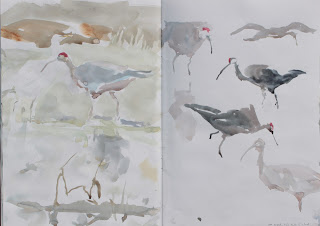