Today I met Nadeem and Saud, two remarkable brothers who have dedicated their lives to rescuing and rehabilitating Delhi's injured black kites. They save many of the huge number of kites injured daily in Delhi, the majority from collisions with toy kites used in the hugely popular game of kite flying and fighting. In kite fighting, flyers have traditionally used manja, a thread coated in powdered glass which enables opponents to slice loose each others kites. This practice has proofed lethal to birds, especially kites, since they fly at low levels through the streets scavenging for food, making them especially prone to collision with the manja threads. Nadeem and Saud found their first injured kite as young boys. Overtime their compassion and determination has led them to grow a rescue centre caring for hundreds of injured birds within the 3 rooms and rooftop of their home, which also houses their small family business. The use of manja was outlawed in India two years ago after several people, including two toddlers were killed by loose threads. Its use however remains prevalent on the streets of Delhi. During the height of the summer kite flying season the brothers expect to house on average, 300 injured black kites in their rooftop aviary.

Nadeem and Saud pick me up in Old Delhi and we make our way out of town, heading East in Saud's Golf. It's an exciting half hour drive for me as I look forward to visiting a place I've wanted to set foot in since my first tantalising glimpses of it from the highway, on first arriving in India. The most obvious landmark in this place is a rubbish dump which has grown into a staggering 200 feet high. A reasonable sized hill in a flat landscape, a Bass Rock built of rubbish. Directly to the North at the foot of the dump is Delhi's main fish market. A little further East, there is a meat market and processing site, the largest in India. With India remarkably being the largest exporter of beef in the world this site is huge. The whole area, unsurprisingly is a magnet for avian scavengers, especially black kites as well as most noticeably, Egyptian vulture and egret in far fewer numbers. Kites in their thousands powder off the distant ridges of the dump, playing with the thermals. A sight no different at distance to the majestic spectacle of a Celtic seabird colony in the height of the breeding season. Kites at a nearer distance swirl in shoals that tighten and dissipate, then reform again in an unfathomable yet fluid dance; an avian tribute to the silver bodies now lying in lifeless regimented formation on the market slabs below. On the ground, every space on every substrate, pylon to rooftop is taken up by the dark body of a black kite. All in all the number of kites visible is in the tens of thousands. This number is at its highest around now as migratory birds swell the local ranks, even so, Nadeem tells me this market complex built 10 years ago to replace the burgeoning markets of Old Delhi, is most likely a major factor in the boom of Delhi's kite population over the last 20 years (concurrently the resident vulture population has crashed). 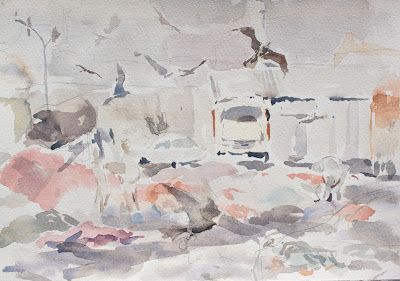 We park the car in a far corner behind the main fish market, beneath the shadow of the vast landfill. The market compound is set lower than the surrounding area, concrete walls hold back the steeply rising dump beyond. The roughly tarmacked ground beyond the car is saturated with oily blood slick puddles, heaps of discarded fish waste glisten pink, silver and lime green. The floor slippery with a film of grainy fish oil as I step from the car. Inside the market men (it's all men) deftly clean and fillet fish on cleavers planted at right angles in the ground between their crouched knees. There service is apart from the sellers who are numerous, there wares spilling out onto the narrow single file walkway around this maze of aquatic bounty; huge rows of tuna, alien headed dolphin fish, glittering blue barracuda, pretty star shaped fish, milky white ones, piles of bait and barrels of riving catfish and the sad sight of limp foot long sharks amongst many more unidentifiable produce. I leave Nadeem and Saud searching for tonight's supper and fish for a recently rescued painting stork, to head back to the dumping site where we parked. Amongst the constantly replenished fish waste, scavengers, human and avian pick their opportunity to salvage what they can before diggers scrape the site clean. A teenage boy tears scraps of flesh from fish spines that others see no value in dealing with. He carries them away, perhaps to re-sell or simply for his own sustenance. A dozen kites swoop and dive between this activity, choosing morsels on the wing. Many more kites and a good number of egret languidly survey the gluttonous feast from perches along the wall and undulating market rooftop. 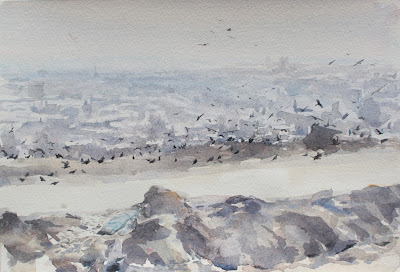 We drive to the summit of Ghazipur's 200 foot dump, Saud's golf sliding on the hairpins as the tyres break the dry crust and slip on the decomposing rubbish. Two thirds of the way up we pass through a smog and dust cloud entering a new and strange environment, an apocalyptic wilderness with its own microclimate it seems. All along the barren moon scape ridges and craters of the summit, perch black kites and vultures, hundreds more soar along the updrafts. I paint a privileged areal view of Delhi in this throat clogging atmosphere, between rise and fall of dust clouds kicked up by passing dumpers. The truck drivers wear an expression of constant amazement and amusement, a reaction I think to the terrifying, dystopian world their work occupies. A monument to the madness of humanity. 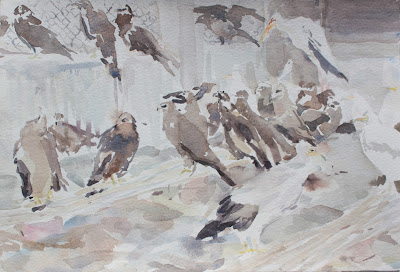 Saud and Nadeem invite me home. We sit in the family home as Saud's two year old presents Mark and I with a welcoming parade of his entire fleet of toy trucks and cars laid out on the mats in front of us. After coffee in the cool room, I am taken for my first look at the aviary on the roof. Around sixty black and black eared kites as well as half a dozen Egyptian vultures and a painted stork are in residence. The brothers clean the cage, water and feed the birds. The painted stork takes the fish, feeding for the first time since its arrival without assistance. As dusk falls a couple more kites fly into the aviary through its open roof. Once they can, the kites are free to fly in and out, eventually they are taken further afield to be released. 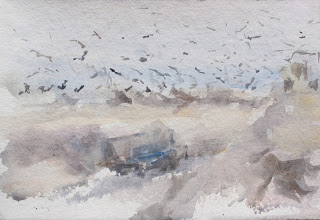 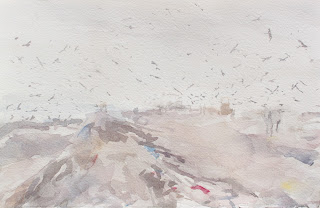